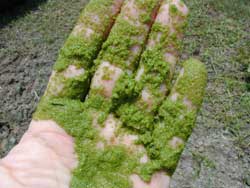 Algae based fuel startups are now running the gamut of most biofuels. Ranging from biodiesel, gasoline, jetfuel to ethanol (a lot cheaper than the corn derivative to boot). Fortune Magazine did a nice piece on “The next big thing in energy: Pond scum? stating the trials and tribulations of Cambridge, MA based GreenFuel Technologies. The business model behind GreenFuel is capturing CO2 emissions from contaminating companies and promoting algae growth that can be used for fuel as an end product.

The curious setup is an experimental bioreactor that takes the stuff of pond scum – algae – grows it like mad, and turns it into “biomass” that can be processed into fuel for cars and trucks. Even better, the GreenFuel system could help to clean up coal too.

Another company according to VentureBeat a Flordia-based self-funded startup called Algenol Biofuels, will produce nearly a billion gallons a year of ethanol by 2013. The startup just signed a deal with a new Mexican company called BioFields to build a refinery.

Also Sapphire Energy a San Diego startup claims it has created an actual crude oil like substance that can be processed and transported by existing refineries and burned in your actual gas tank…..WOW! Talk about shaking up the oil industry.

So what is driving all the algae based startups?

Exorbitant energy prices for one, but the real impetus is probably DARPA (Defense Advanced Research Projects Agency) a federal program launched last November to enable the cost-competitive production of military jet fuel from both cellulosic and algal sources.

Two quotes from Fortune sum up the program nicely:

In a move that galvanized biofuels entrepreneurs, The director of the program, Douglas Kirkpatrick, says he thinks major questions about algal fuels’ technical feasibility will be answered in “the next three to five years.”

That sounds about right: Algae-energy research is bubbling with new ideas and talent and is beginning to get backing from venture capital. “In the past the money in this area went only to academics,” says Matt Caspari, CEO of Aurora BioFuels in Alameda, Calif. “Now it’s reaching entrepreneurs who are applying technologies that didn’t exist ten or 15 years ago.”

The algae fuel push is not just for the venture capitalist and startups, Shell is throwing some weight behind algae to produce diesel fuel as well. This space is getting hotter than an algae plume in the Sahara desert.

Carbon Emission Reduction is next commodity!