Cuil is a new search kid on the block and supposedly the next Google Killer. The founders of Cuil, pronounced cool, (actually Gaelic for knowledge) have one good reason to tout their startup search engine is better than Google….they use to work there! Tom Costello and Anna Patterson are the husband and wife team behind Cuil.

According to Motley Fool

Google acquired the technology behind Anna Patterson’s last search engine four years ago. She spent two years at Google after that before leaving the company, gradually constructing Cuil along with a few former Google engineers.

It makes you wonder if the former engineers fast-tracked the building of Cuil after Google gobbled up DoubleClick and asked certain employees “Did you sign the non-compete” —“great, you’re fired”. That tends to put a strain on the “Don’t be Evil campaign”.

So what makes cuil so cool?

1. Voracious indexing – over 121 billion pages indexed and Cuil is not stopping until entire web is indexed.

3. Cuil presents searchers with content-based results, not just popular ones

4. A nice ajax search box that finishes search terms as you type.

So is the Cuil algorithm superior to Google when it comes to indexing the monsterous web? I may be premature in saying this but…No. I am not formally schooled in search tactics such as relevancy and search architecture but I can determine a good search result when I see one. Let’s take a look between Cuil and Google for the search term “startup addict”
(yes, I’m vain, like the rest of the world). 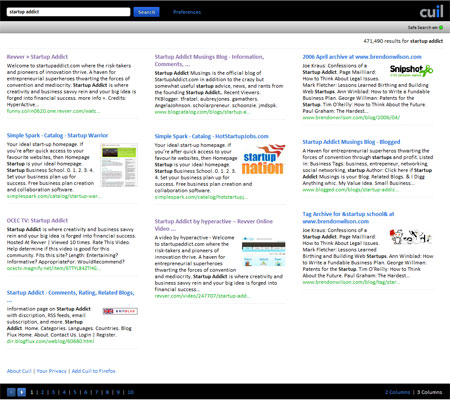 Google is far more relevant for the term. The startupaddict.com (the social network) is #1 with a popular blog post being number #2. You continue down the page and Google has place carefully weighted results appropriately.

Cuil decided to show “aggregators”, “blog networks” and a “few poachers”. As well as a technorati search, and user-submitted video site. I also noticed bogus imagery associated with some results. It’s nice to have an image with text results, but it should be relevant. It appears cool is going over wrappers of content rather than the actual meat and source of the content.

For the sake of disclosure, I did 5 more searches and felt Google’s algorithm to be superior. All in all, I do like Cuil, although monetizing looks like an issue unless the company goes to a column format of sponsored results.

Cuil received series A funding from Tugboat Ventures and Greylock Partners, and series B funding from Madrone Capital Partners. Monetizing the site may not be the goal at all because Cuil smells like a buy-out rather than a next-generation search engine. Three major VC’s threw hefty money in a market place that is dominated by one major player and billions in the piggybank. Can you say exit strategy….if you can’t Microsoft can.