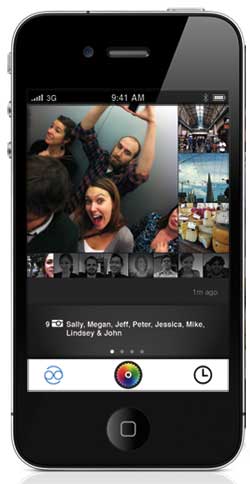 Serial entrepreneur Bill Nguyen launched his latest company today called Color. There is a tremendous amount of buzz in a short amount of time already in place for this startup that could.

The buzz is probably warranted seeing how superstar VC firm Sequoia Capital infused $41 million in the photo-sharing app. Okay, so it a photo sharing app that acts like twitter but still….is it worth investing $41 million? I would normally wager no, except the perfect storm is brewing around this photo app.

The concept of Color is to take pictures and send a steady photo stream to the app. Color will then pick up your specific location and begin displaying other nearby photos. The app can become so granular that a stranger could be taking pictures of the same restaurant that you are in at almost the same time and you would see the alternate angles.

Color does have a very specific model of organic location based photo-streams that will allow for serendipitous discovery among friends and strangers. This may work against the current competition as Facebook is a Goliath trying to bring a web-based experience to mobile. Also, popular FourSquare is incorporating photos but only as a sidebar to their check-in business model. As for other photo sharing apps themselves the social aspect, place of being and immediacy seem to be the missing ingredients.

The applications for color can be pretty interesting from live cascading shots of a crowd at a sporting event to weddings. Imagine if you missed a big crash on turn 3 at a NASCAR event, chances are one of the other 100,000 people in the crowd caught it and posted to color. This will be an evolving business model with so much social control in the hands of the crowd especially deeming every photo taken to be public.

I can only assume with the founding team and a large bank-roll there is a business model baked in already somewhere yet to reveal itself. If not, it will be very interesting to see how the crowd will let Color monetize them.